They were denied access to the meeting which shows Australian governments are being subversive on the issue of Climate change and will not debate the facts.
Below are their accounts plus that of an un-named attendee (so he does not get sacked - I can only reveal his identity to media confidentially to verify he is genuine)

From the attendee's email, we understand Paul Holper from the CSIRO has claimed Climate Sceptics all:
- Believe there is a conspiracy
- Pull out their own fake experts
- provide selective evidence
- misrepresent things and use logical falisies

President of The Climate Sceptics, Leon Ashby, says in response: "Sceptics do recognise the brainwashing the IPCC and governments like the Vic Government are doing". How much of a conspiracy it is, time will tell".

We also recognise many of the worlds leading climatologists and atmospheric researchers such as Professor Richard Lindzen, Roy Spencer, John Christy, Vincent Gray, Garth Paltridge and many others (most of whom have assisted the IPCC but their work gets ignored) are saying the Climate scares are vastly exaggerated if not completely wrong and that many emails have surfaced showing the IPCC evidence has been "falsified" or "cooked."

Then there are the researchers such as Anthony Watts and David Archibald giving public presentations Australia wide willing to debate anyone on how false the Claim that CO2 causes Climate change is. 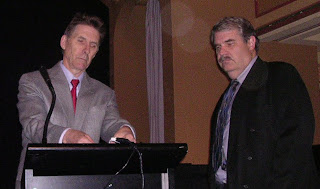 Mr Ashby adds the Sceptics such as myself are out in the open happy to debate anyone anytime. The government and their alarmist friends are hiding behind closed doors discussing ways to trick the community into believing unsubstantiated scares including CSIRO scares.

Also should the claim that Graeme Pearman (Former CSIRO chief) have said 10 years ago "If anyone can disprove what were saying here, I'll give you people, money, resources, what ever, to disprove this science". then we sceptics want to know if the offer still stands and we will be encouraging researchers to take up the offer.

Colin Ely's account:
The Department of Sustainability and Environment were sponsoring a lecture today by the CSIRO's Paul Holper, entitled, Dealing with Climate change Denialism.

As a former Victorian Public Servant and a member of the Climate Sceptics Party, I thought I would attend and listen to what was said and, hopefully ask a few pertinent questions.

I attended this morning and actually was the first to arrive and just walked in and sat down and waited for the lecture to attend. A short time later a Public Servant came down and said it was a government function and asked me to leave. I replied that I believed the Treasury Theatre was a 'public place' and that you can't be guilty of trespassing in a public place. He advised that he was going to call 'security', I replied that if that was what he thought was needed, then go right ahead, and I sat down again and waited for the lecture to begin.

A short time later two members of the Victoria Police Protective Security Group arrived and asked me to go outside with them. They advised me that it was a Victorian Government 'private' function. I replied that I believed it was a 'public place' and therefore I wasn't trespassing . They advised that that wasn't correct and if I tried to re-enter they would arrest me, (I would hasten to add that at all times these two officers treated me in a professional and respectful manner)

I therefore said that I understood them and would stay outside the theatre and, as is my democratic right under the Westminster System of Democracy, would stand outside and 'politely' abuse the attenders of the lecture. They advised me that I couldn't do that in the Treasury Reserve either. So there I was, standing outside the entrance, being 'guarded' by two of 'Victoria's Finest'!

Later Alan Barron and I asked if we could hand out flyers to attenders after they left, they told us that we couldn't do that either, so we bid them good day and left.

======================
Alan Barron's story
I told the security people I was a federal public servant and a Victorian taxpayer and would like to attend the lecture. I was curtly told in order to gain entrance, one must have pre-registered and have one's Victorian public service identity card on their person. If you had no ID and your name was not on the list, that was the end of the discussion. The meeting was for only registered public servants only - capis! I felt like Winston Smith, shades of 1984!

I got talking to fellow sceptic - Colin - who was standing not far from the entrance. He said he had gained entrance and had just become seated when the security guys came up and said they needed to check his details. Seeing as his name was not on the list, he was told that it is an offence to `trespass on government property’ and then promptly frog marched him out of the theatrette.

Alan says "If the government thinks climate change is such an important issue, why not throw the issue open for public discussion and debate? This nonsense about presenting only one side of the debate and holding meetings to warn people of the dangers of alleged `climate change denialism’ smacks of arrogance and manipulation as well as being patronising and condescending."

Chris Mitchell introduced the presentation. He is a Ministrerial Advisor to the Minister for Climate Change on Adaption.

Chris acknowleged the traditional owners of the land on which we met (and said how they guided Australia through climate change in times before European invasion).

Chris declared that he has a 'day job' as a director of an ASX listed carbon offset company.

Paul Holper then went through the graphs of CO2 levels over time, temperature over time, talked about Cape Grim. He said "more heat trapping gasses means more heat is trapped", and talked about correlation, but not about causation.

Paul has worked at CSIRO for the last 20 years, and commented how predictions of 20 years ago have come true, and how current predictions are now much worse.

Paul then quoted a "European Journal of Health" (or something like that) and an article that analysed "Denialism" in the health area. He said there were 5 main characteristics:
Denialists all:
- Believe there is a conspiracy
- Pull out their own fake experts
- provide selective evidence
- misrepresent things and use logical falisies

Paul then talked about an (unnamed) US scientist who denied Ozone was causing a problem, was a passive smoking sceptic, and is now a anthropogenic global warming sceptic.

He showed slides by John Gardener at CSIRO (Social scientist) who classified people into one of four groups - Sceptics (know but don't think it is a problem) (5%), "Disengaged (don't know don't care)" (15%), "Engaged" (know and care) (35%) and "concerned uninformed" (45%). This was charted on an x/y graph with x being concern and y being knowledge.

Paul recommended not treating Climate Change as a green issue, as that puts people off.

Paul suggested that CSIRO had put out "Fact Sheets" and FAQs to counter all of the sceptical arguments.

He then went through tips on how to communicate the problem of cilmate change effectively:
- Be Clear; Impartial; relevant
- Be Objective
- Be Practical
- Message must resonate
- Avoid doom and gloom
- Avoid impenetrable language
- Use different media
- Provide info for different levels of understanding
- reiterate over time
- be positive

He also mentioned Graeme Pearman (Chief of CSIRO Atmospheric Research in Australia from 1992 to 2002, & his former boss in CSIRO) standing up in a room 10 years ago saying "If anyone can disprove what were saying here, I'll give you people, money, resources, what ever, to disprove this science". No one has taken up that offer.